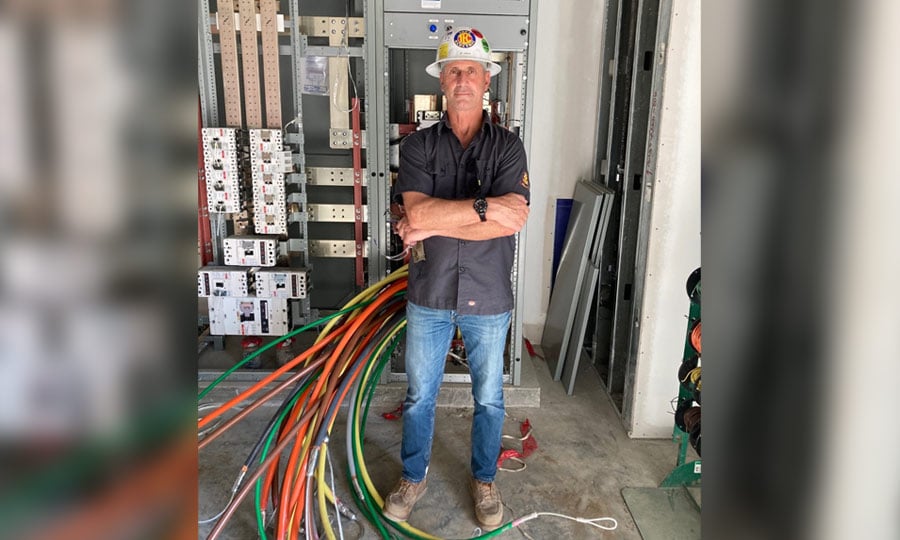 Jeff Lorenzen’s business card may label him as a production superintendent with Taft Electric, but that title only tells part of his story.

Lorenzen is an industry veteran, a residential wireman who went through the apprenticeship program and reclassified as an inside wireman. He is a supervisor and a mentor who reviews the work of his colleagues in an effort to make every overall job more productive. Off the clock, he’s a husband, father of three sons and grandfather of one granddaughter with a second due on New Year’s Eve. An avid cyclist who has completed eight half-century rides with the Boy Scouts, he can often be found climbing the hills behind Palmdale where he makes his home.

And he’s also a proud 32-year member of Local 11 who praises the benefits of being in a union and of working for company both of which have allowed him to raise and support a family.

“It helped me put three kids through college,” Lorenzen said. “I’ve been able to do a lot of different type of work in the electrical trade. The fact that they let me teach things and mentor on the job has been good.”

A native of Huntington Beach, Lorenzen and his family moved to Colorado when Jeff was 9. His father, John, was a union butcher who ran a deli and liquor store. In 1986, when Lorenzen was in his early 20s, an electrician friend who had moved to California encouraged Lorenzen to come out and join him.

“He said, ‘You could start working tomorrow,’” Lorenzen recalled. “So I packed up my stuff, moved out on a Friday, stayed at his parents’ house over the weekend and started working on Monday. I haven’t been able to qualify for unemployment since.”

Two years later, Lorenzen married his wife, Giovanna. That same year, he joined Local 11 as a residential wireman and eventually took the apprenticeship course that allowed him to reclassify as an inside wireman. Taft Electric has offices all over Ventura County, and over the years, the job has taken him to several memorable projects including the film preservation vaults in Santa Clarita, the west campus expansion of Antelope Valley College and a solar ranch in Lancaster that employed 350 electricians.

“The last time Rusty Roten had his tool bags on was a job for Taft Electric in the Pacific Palisades,” Lorenzen said. “He told us that he was going to become the president of the union and we threw him a little hip hip hooray party.”

While the COVID-19 pandemic has devastated the economy and affected jobs in every industry, the work of electricians is still considered essential. Given the protective equipment they routinely use, electricians are better prepared to stay safe than workers in other industries, according to Lorenzen.

“The policies and procedures that the company put into place to stay open makes it a little more challenging to go to jobs, but the governor has deemed us essential workers. That part of it is great,” Lorenzen said. “Everyone on the job has been trained to wear personal protective equipment (PPE) for a lot of things. Hard hats, gloves, face shields are all things that we’re all using all the time. Now we’re basically doing that kind of thing at home.”

On the home front, the pandemic has put a kink in the Lorenzens’ ability to bond with their grandchildren. Two of their sons live out of town – one in Fresno, the other outside of Annapolis, Maryland. They have only seen their first granddaughter, Zoe (who is six weeks old) for a total of three hours.

“My wife has wanted grandkids for like six years now,” Lorenzen said. “We’re super excited [about the new arrival] but we probably won’t be going out to see them until after the vaccine comes out.”