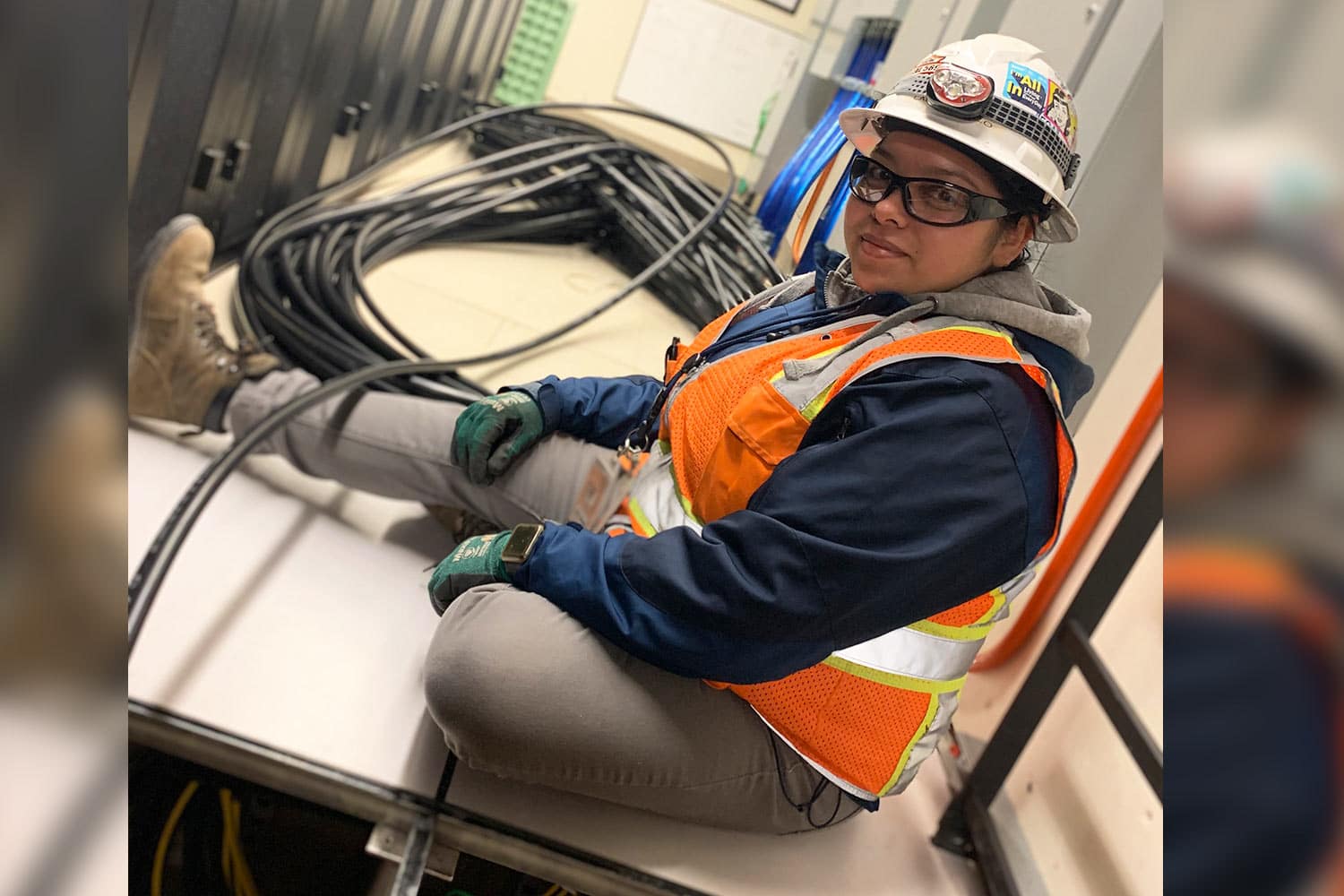 Growing up, Lali Castillo never imagined her future would hold a career in construction. Alt-hough Castillo’s brother and uncles work as carpenters and roofers, her livelihood began in the restaurant industry where she juggled being a single mother, working full-time and attend-ing school. Recognizing that the path wasn’t necessarily headed toward a financially stable future, Castillo took the advice of a friend and fellow IBEW 11 member and joined the Union in 2015.

“When bootcamp ended I had my first job at the Rose Bowl in Pasadena,” Castillo recalled. “I was working 12-hour days in the summertime and thought that if I can handle this job, I know I’ll be able to do this.”

It was during that period that Castillo gained a solid foundation to join the ranks as a union Sound and Communications Installer, and was one of the few women in the trade. From the start of the apprenticeship, Castillo said she was impressed by the number of people in the Union who were willing to pass on the knowledge of the trade.

“The Union has been great from the moment I started as an apprentice,” said Castillo. “Being a woman in the trade is difficult sometimes, but I’ve come across many Journeymen and Foremen — both men and women — who’ve been willing to teach me what they know. That’s why I decided to become active in the Union. The Union has given me so much in terms of a career and knowledge, so why not give some of that back?”

After starting a job at LAX, Castillo became aware that there were several Inside Wiremen shop stewards but none devoted to Sound and Communications. She kept in touch with one of the stewards and learned more about the role before broaching the topic with Representa-tive Chuck Webb, who informed Castillo that Sound and Communications had never had a shop steward. Castillo immediately took action to change course and enrolled in a shop stew-ard class offered by International IBEW.

“I think it’s really important especially with LAX that was one of the biggest projects — I thought it was really important to have that representation,” Castillo reflected. “I was told that there are shop stewards but not for Sound, so it’s not a lack of representation but it’s hard to approach someone with an issue when there are different agreements. It’s so important to have someone who understands what you’re talking about and give you the right information. Having someone who’s seen your agreement and knows the type of work you’re doing is even better.”

Castillo has been a shop steward since January and has gained a great deal of confidence in the role by constantly learning and studying relevant documents. She’s become the go-to person in her shop for all sorts of information including, resources provided by the Union relat-ed to the COVID-19 pandemic. Castillo attributes her leadership success in part to being ac-tively involved in IBEW conferences, classes and meetings, as well as her background in cus-tomer service where she learned to communicate with people from different backgrounds.

“Being active in the Union has taught me that if you want to be heard, you have to speak up,” she said. “If you don’t say anything, they think everything is ok. I’ve always had a pretty tough attitude for just being five feet tall. I’ve always tried to be outspoken about things and ask questions when I don’t understand something.”