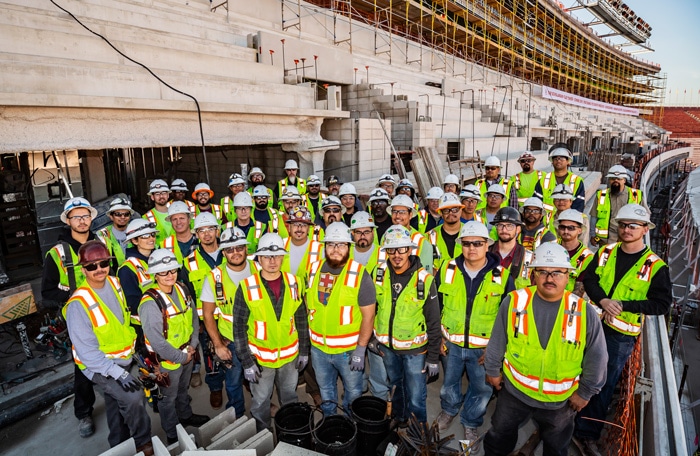 From serving as a world stage for two Summer Olympics (1934 and 1984) to the 12-year stay of the L.A. Raiders to decades of USC Trojan football, the Los Angeles Memorial Coliseum has seen it all. IBEW 11’s finest have been there before to get the job done and they’re on site again, renovating one of the world’s most famous sporting venues that, in the summer of 2028, is set to become the world’s first three-time Olympic host venue.

A team of over 50 inside wiremen, journeymen, apprentices and low voltage communications specialists are giving the exhibition Park stadium known as the Grand Old Lady a splashy makeover. The work will include the installation of additional seating as well as new, state-of-the-art elevators, suites, press boxes, broadcast booths, concession areas and a rooftop party deck.

Hardhat-toting workers like Antonio Reyes are bringing the Coliseum facelift to fruition. As he prefabbed for the installation of lights on an outside deck and running wiring and j-boxes for an upcoming safety inspection, Reyes took a moment to reflect on what Local 11 has meant to him.

“The union has opened many opportunities for my family and me,” said Reyes, 24, who joined the union six months ago. “It’s really good for me, knowing I’m always going to be able to find high-paying jobs and knowing I always have someone that has my back. If something goes wrong, I know I can speak up and not be afraid of getting fired.”

One of the current tenants, the NFL’s Los Angeles Rams, which is sharing the Coliseum with USC’s football team, makes scheduling tough given the amount of activity the team has generated.

“We’ve got to have everything back up and running, all cleared out for home games, at least two days in advance,” said Luis Pena, 43, a low voltage technician. “It’s a unique challenge, all the stopping and starting we’re having to do.”

Since the Rams are in the midst of one of their best seasons in franchise history, the scheduling challenges may continue into late January, depending on how the team’s playoff run turns out. The permanent new broadcast booth can’t be installed until after the season concludes.

Alex Chavez, 34, a four-year Local 11 member, is a foreman on the job. Chavez spends his days pre-planning for his guys, divvying out materials for the day, laying out tasks and making sure safety precautions are always adopted. Chavez noted the array of trades on site.

“You have so many trades here going 100 miles an hour that are all trying to meet deadlines,” he said. “And we’re a following trade. You’ve got framers, dry wallers, precast, ironworkers, painters, fire proofers. There are about 17 trades in all. That’s a lot of moving parts.”

Chavez said that the benefits and job security Local 11 have afforded him allow him to spend more quality time at home.

“I get to see my three daughters way more than I used to be able to,” he said. “That’s the best thing ever.”

Lee Gutierrez, 44, who has been in the union since 1994, is the general foreman on the job, overseeing a team of more than 50 inside wireman, journeyman, apprentices and low-voltage technicians.

“I’m a third generation member of the Local 11. My father and grandfather before him were proud members. This union has and always will mean a lot to me,” Gutierrez said. “I always have security, in terms of health insurance and medical needs, a great retirement program and there’s the brotherhood, as well.”

Gutierrez’s Local 11 legacy has made working on this particular site especially meaningful. “My father worked on the 1983 remodel ahead of the 1984 summer Olympics held here,” he said, beaming. “It’s an awesome opportunity to get to work on the same facility as him decades later, a place I love that I’ve been coming to for years.”

By contrast, the Coliseum renovation workforce also includes journeymen like Kevin Doshna, 28, whose first day on the job was also his first day ever at the Coliseum.

“It’s cool being around guys who have been coming here for years, who have family who worked on the Olympic job,” Doshna said. “I’ve heard guys talk about ‘I remember when the Coliseum was this or when it had that.’ It’s awesome to be around that. This a pretty cool experience for me, knowing I’ll get to tell my friends and family, this just being a historical job and all. It’s an honor. This is an iconic job.”