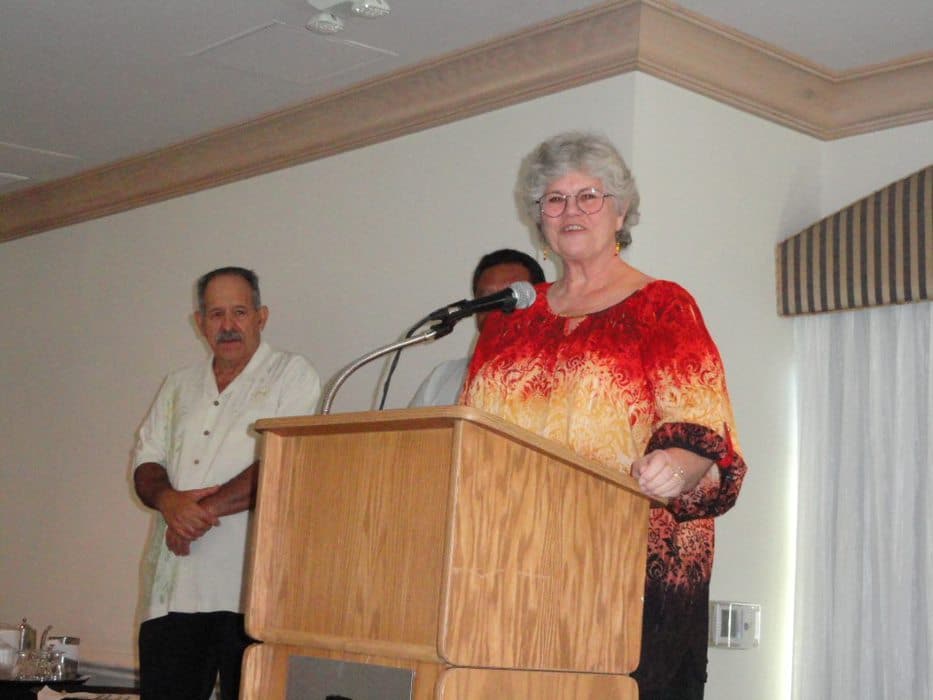 After More than Four Decades, Jane Templin Retires from Local 11

During any conversation with Jane Templin about her experiences with IBEW Local 11, the word “family” will invariably come up.

“Family is family,” Templin said during a conversation from her home in Long Beach. “We’re all different. We all bring different things to the table. The family part never stops. Just because you retire, you don’t lose your family.”

After more than four decades with Local 11, Templin retired from the union in September.

During a ceremony prior to the Labor of Love Food Distribution event on Labor Day in Wilmington, IBEW 11 Business Manager Joel Barton presented Templin with her 45-year pin as well as a number of proclamations and certificates from local leaders. Even with these accolades, her impact and influence over the past 44 years is impossible to measure.

Templin’s arrival at  IBEW 11 membership and her ascension through the ranks is a story of both of motivation and inspiration —  motivation to overcome the misogyny that was once all too common in the workplace and inspiration from a chance encounter at a children’s carnival.

After moving to California from Missouri with her husband in 1967, Templin, now 73, landed a job as a payroll auditor and worked her way up to a supervisory position. After hiring a pair of additional auditors — both men –Templin learned she earned significantly less than the two employees who were her juniors. That’s when she was told that she made “good money for a woman.”

Later, when the company she worked for learned she was expecting her second child, she was fired six months into her term, per company policy.

“It was less than encouraging,” Templin later said, dryly.

Determined to “find something where I was represented and I made equal money,” Templin bounced around jobs while raising her two children. One day, while setting up a carnival at her children’s school, she helped a friend who was an electrician wire the event. The result  was a revelation.

“I threw that switch and I saw everything come on,” Templin said. “It was such a rush.”

That’s when Templin’s friend suggested she become an electrician and told her about the apprenticeship program.  Templinapplied at the local IBEW 11 hall in Wilmington in 1975 along with 1,400 other prospective members.

At first there was some confusion when she submitted her application as Templin was asked “Is this for your husband or your boyfriend?” After she explained that she was the one looking to join the program, Templin’s application was received and she was accepted into the program the following year.

“It was scary, but I really wanted to do it,” Templin said.

Once admitted, Templin thrived. Her first job was a residential assignment – a townhome at 223rd and Western, where she learned the basics. She turned out of the apprenticeship program in 1980 as a journeyman.

Templin quickly found the union world to be supportive and fair, a place where everyone was equal, as long as you could do the work.

“I was fortunate. I had some excellent teachers,” Templin said. “For the most part, I was embraced. Being in the union, you have people who have your back.”

“The members educated me on what it was to be union. We had each other’s back. We worked together,” she added.

The union expected Templin to be active, and active she was. She held many positions on the jobsite and at the Hall, including shop steward, foreman, general foreman, and the business agent and dispatcher for IBEW Local 11. Most recently she served as vice president and spent the last two decades as an instructor at the Electrical Training Institute.

In retirement, Jane plans on staying in touch with and active with her family at the Local. She also hopes to travel, work in her garden and tackle her husband’s To Do list. She recognizes her legacy in some of the buildings she has worked on, but believes she has made a more significant impact in another arena.

“If you don’t love it, you don’t succeed. If you love what you’re doing, then nobody can hold you back.”