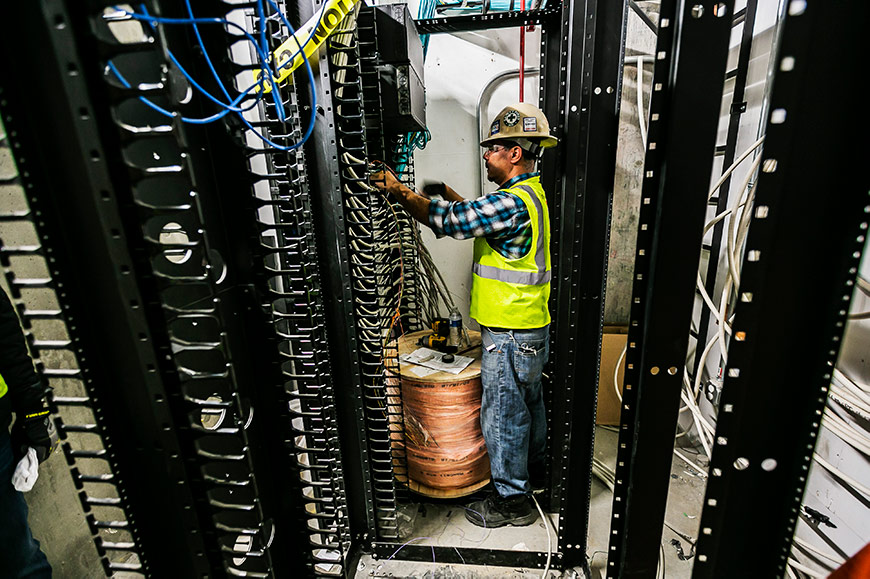 Local 11 On the Job
By Oren Peleg

While on a lunch break, a bearded man donning an orange vest and a hardhat adorned with “IBEW 11” stickers sat on a bench eating a sandwich. His nostrils flared at the smell of the pungent ocean air.

“The air is so salty. That’s Long Beach,” he said.

A coworker seated next to him picked up a taco and gestured to the construction site behind them, replying, “but this is the new Long Beach.”

That new Long Beach will soon feature the brand new Long Beach Civic Center that’s set to revitalize the city’s downtown district for local residents, businesses and visitors. With a price tag of $520 million, the finished product will replace the old city hall and create state-of-the-art offices for the Port of Long Beach, a new main city library branch and a retail marketplace and expansive public park.

Ground broke in June of 2016 and the project’s three main buildings are slated for a mid-2019 completion date, while the public park should be ready by late 2020. Currently, nearly two-dozen highly skilled IBEW 11 electricians working for Telenet VoIP Inc are working at a breakneck pace to install wiring, security systems, electrical foundations and infrastructure and data connectivity at the site.

For some of them, like 28-year-old Detwan Green, a sound installer technician on site, the project carries a personal significance.

“I live like five or ten minutes away from here. I grew up right around here so I know Long Beach inside and out,” Green said standing inside the old court building that will soon house Port of Long Beach employee offices. “I’m really excited to see this when it’s done and tell people that I took part in the project that’s going to be so important to this city we live in. I’ll be able to say I actually pulled cable. That’s always going to be nice to hold onto.”

The IBEW 11 professionals on the project are wearing many hats. Teams spread out amongst the three buildings are pulling 300-foot-long standardized Cat 6A cables to connect multiple floors to main data centers, creating new cooling air racks and cabinets for those data centers, putting in and updating telecommunications facilities and retrofitting the buildings with cutting edge seismic installation.

George Nolasco, 33, a 10-year Local 11 member, has spent the majority of the last few months in a cramped telecommunications room. “I’m just making sure all the connections are landed correctly, that’s the main challenge here,” he said. “Hopefully, this way phone lines will be good to go throughout and it’ll minimize any trouble shooting that needs to be done.

Before joining the union ranks, Nolasco worked in the trade for 12 years. He’s noticed the difference having IBEW 11 in his corner makes in more ways than one.

“The pay, the treatment and the medical has meant the world to me and my family,” Nolasco, who lives in Downey, said. “The medical benefits, especially, have been so good for us.”

Speaking from inside the future Port of Long Beach employee offices, Jose Sierra, 40, nodded at the hive-like activity buzzing around him. Workers were in the midst of ripping out and installing new carpet, placing furniture, setting up desktop computers and adjusting light fixtures.

“That’s been the main challenge, working in sync with so many different trades,” Sierra, who joined IBEW 11 in 2004, said. “I’m up and down on every floor, the basement and the roof even, helping the foreman make plans, terminating cables, routing and dressing them as cleanly as possible. It’s a grind but we’re having fun doing it.”

Overseeing everything is Chris Duran, 36, the site’s general foreman responsible for directing workflow. On this job, he’s proudly taken on an added responsibility—mentoring younger members.

“One of the best part about this work is seeing young guys come up and develop pride in their craft,” he said. “I love seeing that and playing a part in that.”

Case in point: Detwan Green, the aforementioned Long Beach native. Green has only been in the union for six months and this project is his first since securing membership. Even though he imagines a bright future ahead, he’s confident this site will hold a special place in his heart.

“Not every project will be this special,” he said. “Getting to do something like this in my own community is unique. But being in the union has been so amazing for me and my family and I’m looking forward to many more happy years doing this.”