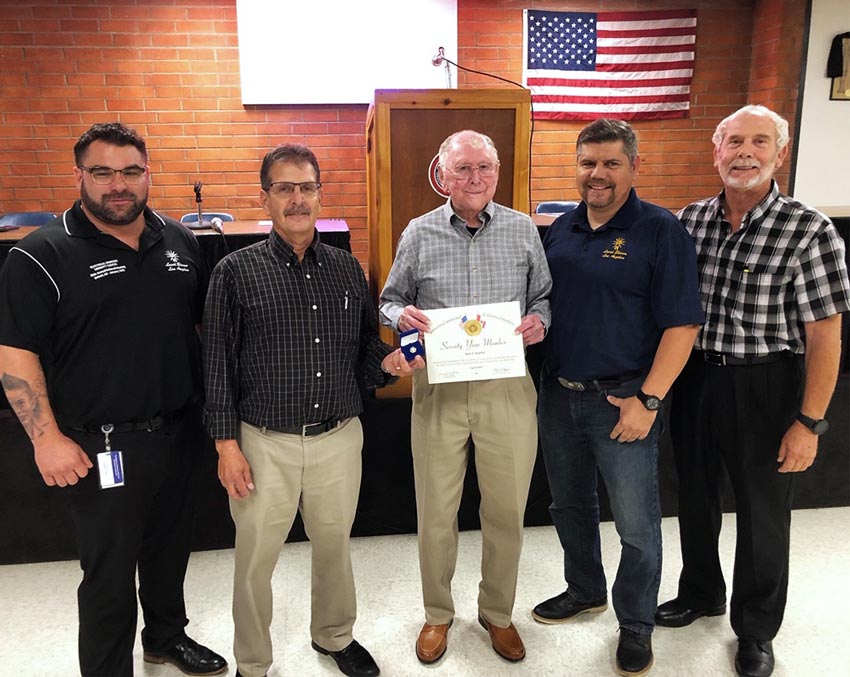 District 4 was honored to have Brother Jack Standel receive his 70 years of service pin at the District 4 Unit meeting on June 4. Brother Standel joined IBEW 11 at the age of 21, in 1949, after his service to our country in WWII. Retiring in 1978, after 29 years of active service as an IBEW Electrician, Brother Standel became an Electrical Inspector for the City of Los Angeles until 1994. He now travels with his son, Ross Standel. During his acceptance speech, Standel fondly remembered his apprenticeship in IBEW, “My Journeyman use to come to work and I used to have to carry his tools. He had them wrapped in a cloth. He would unwrap them, and he use to ask me for certain tools, and I would give them to him. At the end of the day I had to wrap up his tools and give them back to him and he would go home. The good old days.” He laughed and continued, “I had some great Journeyman that taught me everything I know,” but he stressed to the apprentices in the room how important is to continue going to school and continue learning in their trade. Standel worked on some of the great projects of our time, like the original Sylmar Intertie, which is part of the Pacific DC Intertie. After the earthquake in 1971 he returned to rebuild the Sylmar Converter Station. He reminisced about his time in Palmdale, working outside on the transformers and it being so cold they had to wrap themselves up in plastic to stay warm. Brother Standel shared some great memories with the room. He was presented with his pin by District 4 Agent, Marc Greenfield, and he recalled working with Mr. Greenfields father back in the day. Brother Standel still practices his trade around his home to keep his skills fresh, but his days of bending pipe are in the past.