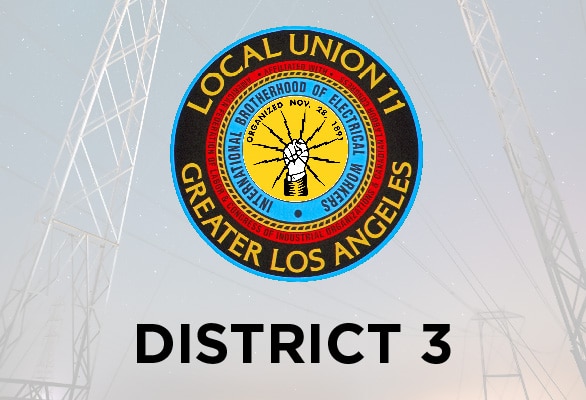 As most of you know, the calls are once again plentiful, and District 3 has its fair share. The Midfield Satellite at LAX is ramping up for this spring with a few contractors working overtime. The Crenshaw/ LAX Metro line has added Dynalectric and Morrow Meadows to their list of contractors. The stadium is also going full tilt with close to 500 IBEW members working there. Not to mention Walton Electric is hiring for their two mixed use projects along the Expo line, as well as Rosendin and Fisk Electric in Century City.

Congratulations go out to all the members that took the stewards class in January. Most were given their certificates at the February general meeting. Special thanks go to the stewards in District 3. Mike Arvahie and Gary Pendleton at the Rams stadium for Rosendin and Morrow Meadows, respectively. ; Tupou Tolo on the Crenshaw/ LAX line with LK Comstock; Ralph Naranjo at Chevron refinery with Contra Costa; and Miguel Angeles and Paul Reyes out at the Midfield LAX project for Helix. Being a steward can be a thankless job at times but deserve the respect and support from all our members.

And finally, if you’d like to support the District 3 welfare committee, we are now selling T-shirts at Commerce dispatch and our unit meetings. We appreciate your support.