Stepping Stones: IBEW 11 On the Job With Bridge Housing

Stepping Stones: IBEW 11 On the Job With Bridge Housing 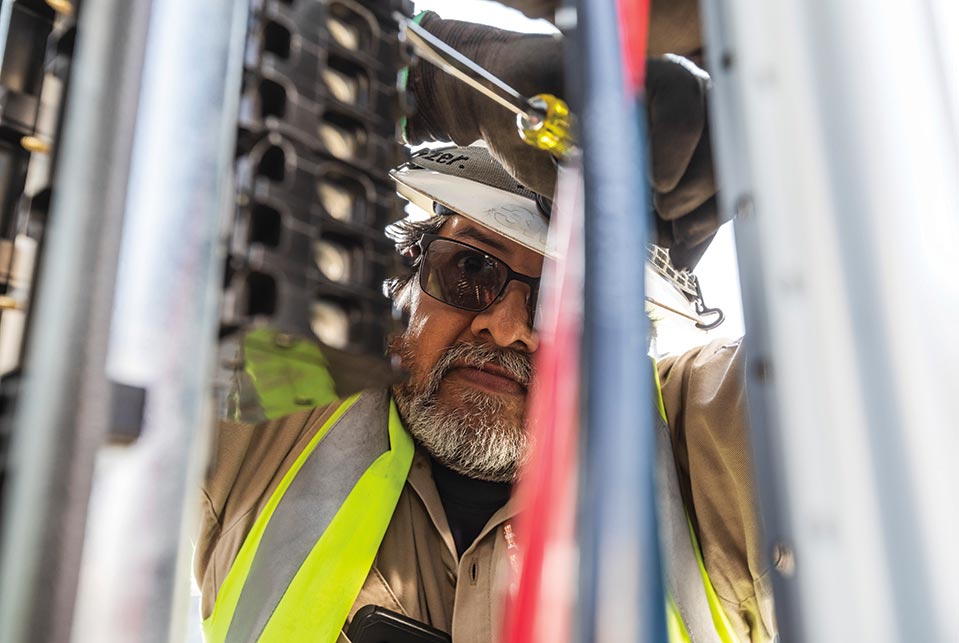 After years of debate about what to do to alleviate Los Angeles’ massive homelessness crisis, work is finally being completed on temporary bridge housing for the homeless.

Local 11 members are right there in the thick of it, powering up several of the sites.

“I believe it’s a step in the right direction,” said Edward Michel, a journeyman working at the Venice site. “At the very least, it’s opening people’s eyes to the situation that we have with the homeless.”

The sites are part of Mayor Eric Garcetti’s “A Bridge Home” initiative, announced in 2018, to set up a temporary shelter in each of the city’s 15 council districts and provide at least 1,500 beds. The sites are only planned to be open for three years as they help homeless people transition to permanent housing.

The Venice location contains five trailers to house teens and youth; a sanitation trailer with bathrooms, showers and laundry facilities; and a giant tent-like structure that will hold bed units for more than 150 people and include rooms for social services.

The Venice site’s foreman, Local 11 member Victor Anthony, noted that when he joined the project in July 2019, it was still just a bus parking lot.

“Sometimes as electricians we don’t get the chance to see the whole process … but at least with this project I’m getting to see it from the very inception all the way to the end,” he said. 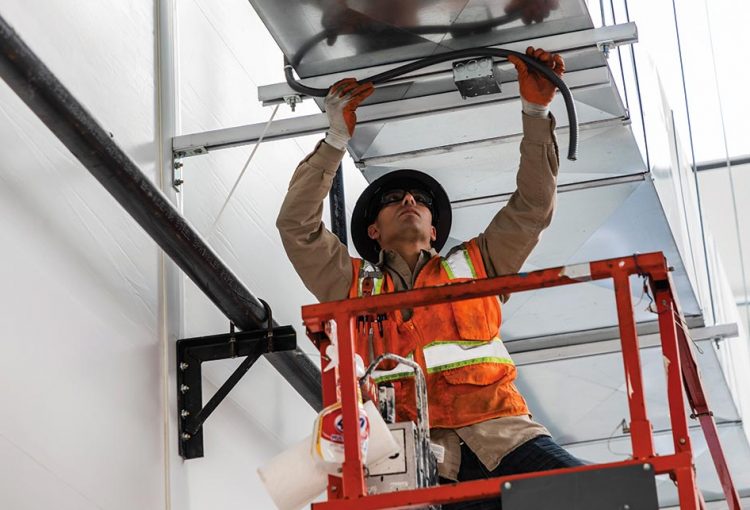 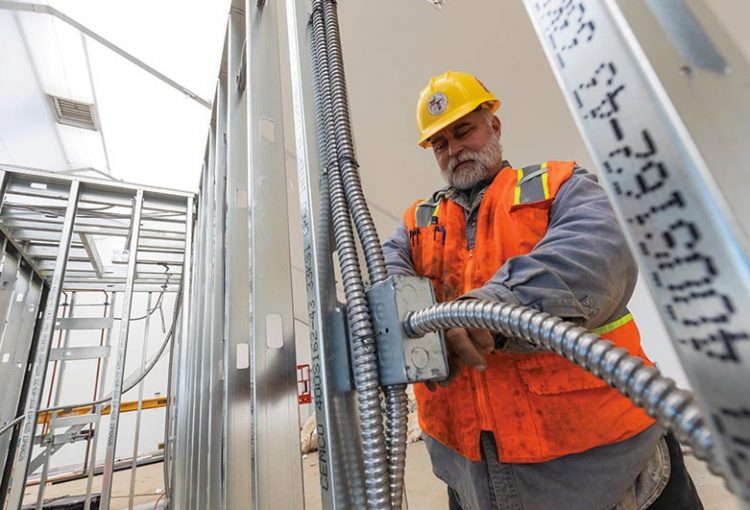 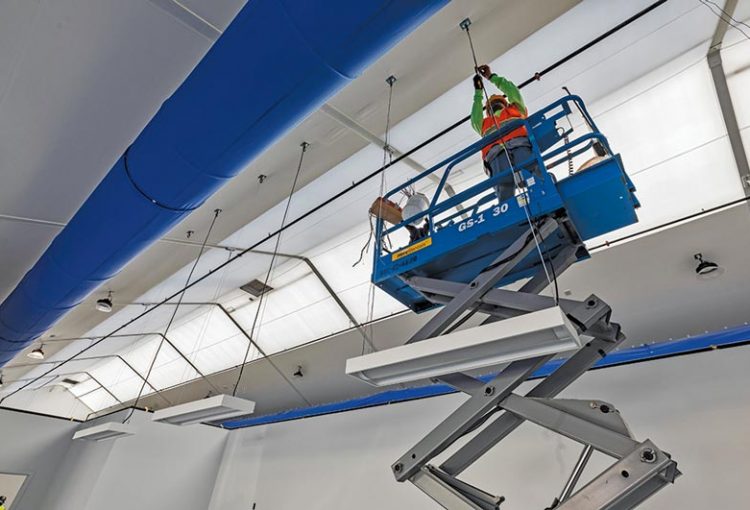 On the other end of West LA, Local 11 members were at another bridge housing site on the Veterans Affairs campus in Brentwood.

This site will allow 175 people to live in the tent structure, all of them veterans.

Carl Tomczak said he specifically requested to work on the bridge housing projects. “There’s a sense that we’re doing something great for the community and we feel really positive about that,” he said.

The bridge housing sites have provided interesting technical challenges for the electricians. Used to working on regular buildings with walls and floors, they’ve had to adjust to an impermanent structure, mounting boxes to beams, and working with I-beams that are 15 feet apart instead of studs that are 16 to 24 inches apart, for example.

“There were a lot of situations that we came across that most of us never experienced before, so with everybody coming together, all these ideas working themselves out along the way — it was a cool experience,” Michel said.

In the case of the housing tent, they needed to set up the electrical before the tent was fully stretched out, “like an accordion,” Anthony said.

“So, we have to make sure as we have electrical going from one point to another that we have enough extra electrical wiring that is going to stretch with it,” he added.

The work also had to be done on extremely tight timeframes.

“The time span that they give us, it’s very intense, to get this thing done in three months,” said Manny Perez, the senior electrician supervisor and Local 11 member in charge of the bridge housing sites. “That’s what they’re pushing for so we can get more people off the streets and into the homeless shelters.”

He noted that the sites are well-designed; some include dog parks, while bed spaces are similar to cubicles, affording occupants a measure of privacy.

“I’ve heard people say it’s a beautiful site, it doesn’t feel like a prison,” he said. “The architects that engineered and designed all this, their intent is to make it feel like a home.” 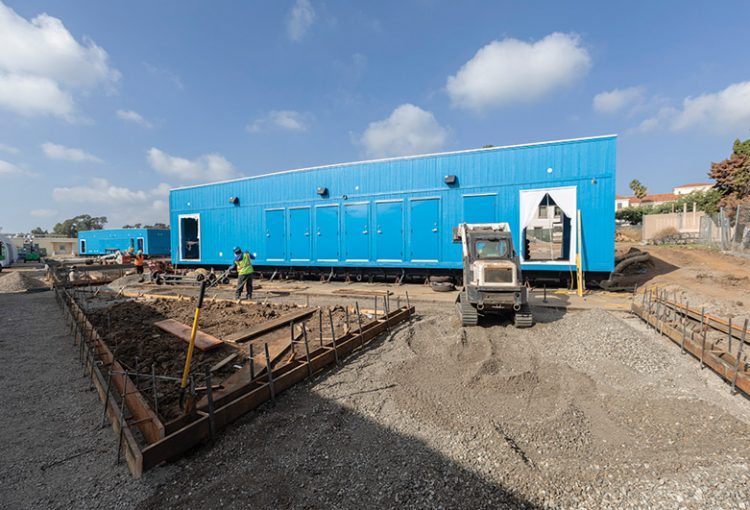 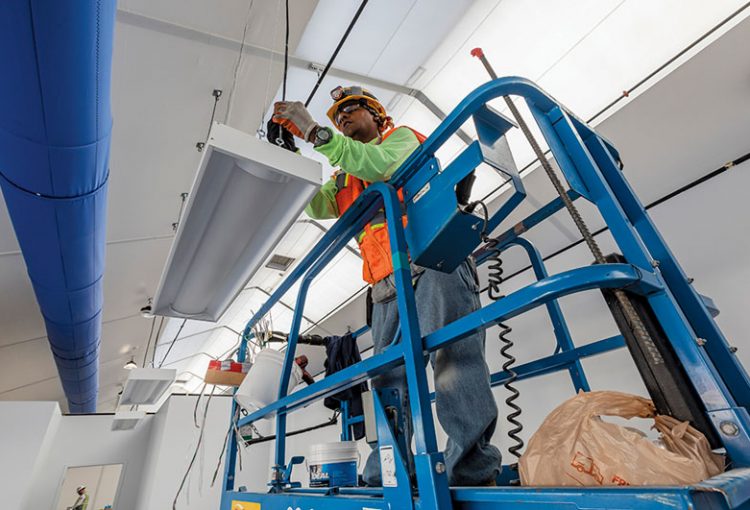 The VA project is foreman Jorge Mazul’s fifth bridge housing project. He said he was once ambivalent about the plan, worrying that they were just enabling the homeless problem and not attempting to fix it.

Now, though, Mazul feels differently. He’s been back to the finished sites, has seen people now living there and, most importantly, has seen the changes in them.

It’s one thing to know about the sites; “it’s another thing to go to the actual project and see these people make a transformation.”

“Literally you see them on the street before they start and then they’re in the project the next week, and they’re up and running and they’re showered and they’re taking care of their business,” Mazul said. “This project is a stepping stone for them to go ahead and get back into society.”