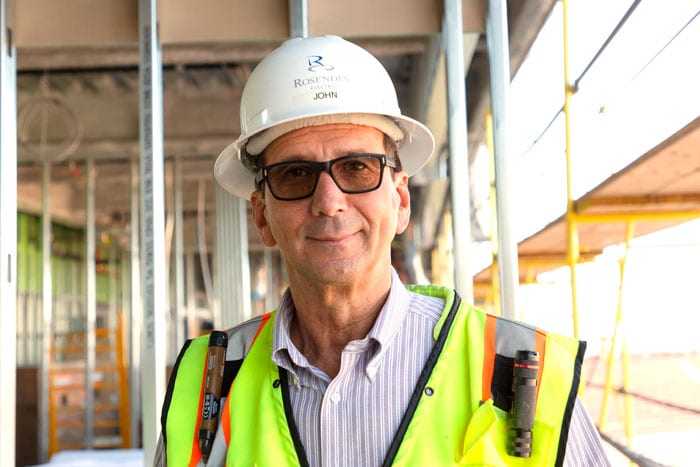 The Los Angeles Memorial Coliseum in Exposition Park has produced heart-stopping thrills and iconic memories for nearly a century. Since opening in 1923, the designated National Historic Landmark has hosted the Summer Olympics and Democratic National Conventions, been home to USC football, two NFL franchises and welcomed iconic performers like The Rolling Stones and Bruce Springsteen. Pope John Paul II even celebrated Mass there with 100,000 worshippers.

“The place is full of memories,” John Degrassi, 65, said recently from inside the iconic Exposition Park venue. “And I’m proud to say I’ve helped build those memories.”

Degrassi, a long-time IBEW 11 member, helped put in Panasonic light panels in advance of the 1984 Summer Olympics and installed the electrical units in extravagant suites when Al Davis and the L.A. Raiders called the Coliseum home.

And he’s back for more.

On an overcast morning recently, Degrassi strolled around the Coliseum, smiling as Local 11’s finest busy at work on the venue’s latest renovation waved and affectionately called out, “Godfather!”

“That’s what they call me,” Degrassi, who’s serving as area superintendent on the job, said with a laugh. “I get it. I’m old. That’s what you get when you’ve been around long enough to watch the work you’ve put into this place come out and get replaced.”

Degrassi has also seen much of his work last. He’s helped with electrical wiring in countless high-rises downtown over the years and, more recently, the Wilshire Grand Center. While overseeing work on the Coliseum, he’s also pulling double duty frequently stopping by the new Los Angeles Rams stadium in Inglewood.

“It’s always cool to drive by the work sites you’ve been a part of,” he said. “For me, that means buildings all over the city. I have my Local to thank for all the work over the years and the ability to provide for my family.”

Even though it’s hard to surprise Degrassi when it comes to a job at the Coliseum, the “Godfather” is finding surprises on this latest facelift.

“This job right here,” he said, gesturing out at wiring on an outdoor elevator, “is unique because it went to the bottom of the structure. We’re digging up two or three generations of renovations going all the way down, which is cool to be a part of. There’s history all around us.”

Speaking of history, in the summer of 2028, the Coliseum will become the first venue in history to host three Olympics. When asked if he plans on being in a hardhat for any potential work on the stadium for those games, Degrassi didn’t hesitate.

“I plan on being retired,” said. “I plan on enjoying my retirement benefits and watching the games like everybody else.”