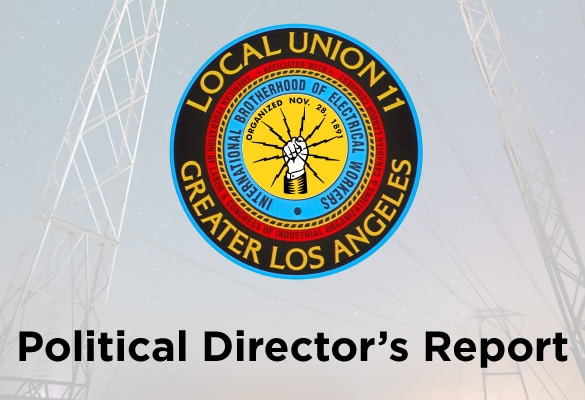 If you voted at one of the new voting centers in Los Angeles County on March 3rd, you know the voting centers were understaffed and crowed. You know that there were long lines and lots of frustration. Since I’m usually working on Election Day, I vote by mail weeks in advance, so I didn’t experience it but heard many horror stories. Here is my suggestion – register to vote by mail ASAP. Especially since we don’t exactly know how we will handle November’s election with the COVID-19 pandemic. Voting by mail is secure and now the best way to reduce your exposure to the virus.

It also took the LA County Registrar’s office longer than expected to certify the March 3rd elections. Way too long.  The good news is that we did have many victories. I want to highlight just a few. Christy Smith is currently in the State Assembly and is running for U.S. Congress in the Antelope Valley. She was the top vote-getter in March and is on the ballot a few more times. Her next election is on May 12th. Should we win then, she’ll be on her way to Washington D.C. but only to finish the unexpired term left by the resignation of Katie Hill. Christy will still need to win in November to claim a full two-year term. Keep in mind that Democrats need to keep control of the House, so we need Christy Smith to win. I hope she can count on your support.

The other highlight is our very own IBEW Local 11 member – Tim Hepburn. Tim defeated the incumbent mayor of La Verne by a comfortable margin. Congratulations, Tim!

I know that for many members, former Vice President Joe Biden wasn’t their first choice to be Trump’s challenger. Truth be told, he wasn’t mine either. Regardless, I will be voting for him in November. Biden is now endorsed by most of the other democrats that were running, including Senators Bernie Sanders and Elizabeth Warren. I’m hopeful he will pick a great V.P., someone that can help him win the supporters he didn’t have during the primary and help defeat Trump. If you’ve been watching the daily White House press briefings, you know Trump is not only bad for working families, he’s an embarrassment to the U.S. and can’t be trusted to put the wellbeing of the country before his ego and bank account.

Finally, I know several friends that have lost someone to the virus. Yes, the quarantine hasn’t been easy but I’m grateful my family and I are healthy. I wish the same for you and your family.