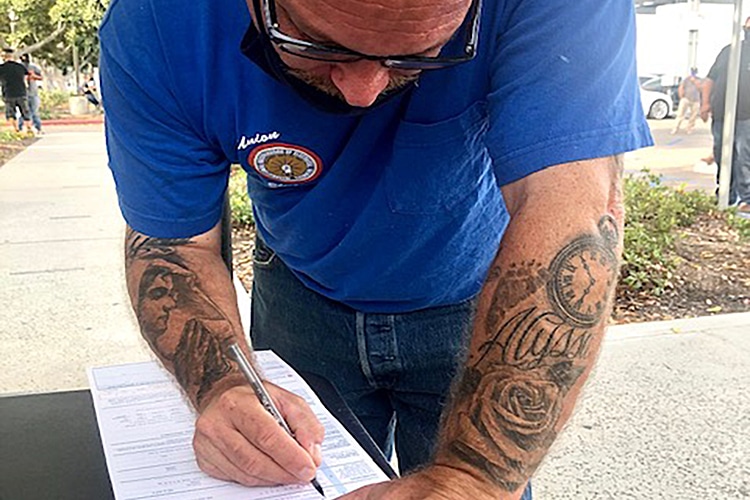 IBEW 11 has been busy the past few months registering members to vote with it’s ‘11 for 11’ campaign. The goal is 1,000 new members registered for the Nov. 3 Election, and the local is well on its way. Nothing is more important than Getting Out the Vote 2020, said 11’s Political Director Antonio Sanchez. But COVID-19 has certainly presented its challenges.

When you’re trying to rally the troops into political action during a nationwide pandemic, you may need to rewrite the playbook and maybe even throw in a few enticements as well.

For election 2020, there will be none of the traditional canvassing, precinct walking or phone banking that Local 11 members would traditionally do to help get out the vote. But the local has launched a voter registration drive to motivate 1,000 members to register and commit to casting ballots.

Through the 11 for 11 campaign launched in August, each Local 11 volunteer commits to contacting and registering 11 members to vote by the Oct. 19 deadline. Volunteers earn raffle tickets and a chance to win prizes like a big screen TV and tools for each member that he or she gets to register on the Ibewvotes.com site (verified by a screenshot).

While members are registering on the Ibewvotes.com site, Political Director Sanchez hopes they will also investigate other election-related resources like poll data and endorsements.

“The idea is that we’re trying to get this website embedded into our culture,” said Sanchez. “Campaigns have to adapt to the pandemic. We’re not going to Arizona or Nevada to help with campaigns. It’s not safe. We’re going to focus on our own house, and the safest thing to do right now is register online to vote. You don’t have to be handed a voter registration card. You can do it on your own time.”

“I have not heard one person tell me, ‘Why are we focused on registering voters?’” he continued. “This is a good thing.”

Although Local 11 officials say that the presidential race is important, the White House is by no means the only box that voters should be checking as they fill out their ballots. By looking up their local’s endorsements, members can cast votes for local candidates who support project labor agreements (PLAs) and other union-friendly policies. Business Manager Joel Barton estimates than approximately 80% of the Local’s membership is registered to vote with about 1,000 still needing to be signed up.

“We’re trying to stress how important politics is even on the micro level,” said Business Manager Joel Barton. “Many of our members are not registered to vote. So that’s the first step regardless of how they vote. We want to educate them about labor’s issues and the politicians who back us. That’s the main thing: get everyone to vote and of course to reach out to the members so we have a more involved membership.”

Organizer Francisco “Paco” Arago has already lined up more than 25 volunteers. As he interfaces with politically active counterparts at other IBEW Locals in southern California, Arago is noticing momentum start to build. After meeting with Local 11, members of IBEW Local 440 in Riverside started their own voter registration campaign — 4 for 440.

The goal is registering more than 1,000 members which would boost the total number of Local 11 members registered to vote to over 95%. That’s a potentially powerful number and one which will likely get politicians to take notice.

“We’re trying to make this a winnable campaign and I think it’s very winnable,” said Arago. “We’ve made it so simple. I could register you right now while we’re on the phone. I could say, ‘Hey brother, Gget on your PC, get on IBEWvotes.com. It will take your two minutes. Are you done? Cool. Send me a screenshot of that and I’m going to go get myself a raffle ticket for a big screen TV.”

When people ask him his occupation, Arago makes a point of saying not just that he is an electrician, but that he is a “union electrician.” The designation marks him as a political person and that’s important.

“It’s our union’s responsibility to build a social consciousness,” Arago said. “You’ve got CNN, you’ve got Fox News and the internet is full of a bunch of stuff. But our union has no interest in lying to you. Our union is going to give you the news that is relevant to your base, to your family and to your consciousness as a working-class human being.”