Local 11 Gets Busy on Downtown High-Rise

Local 11 Gets Busy on Downtown High-Rise 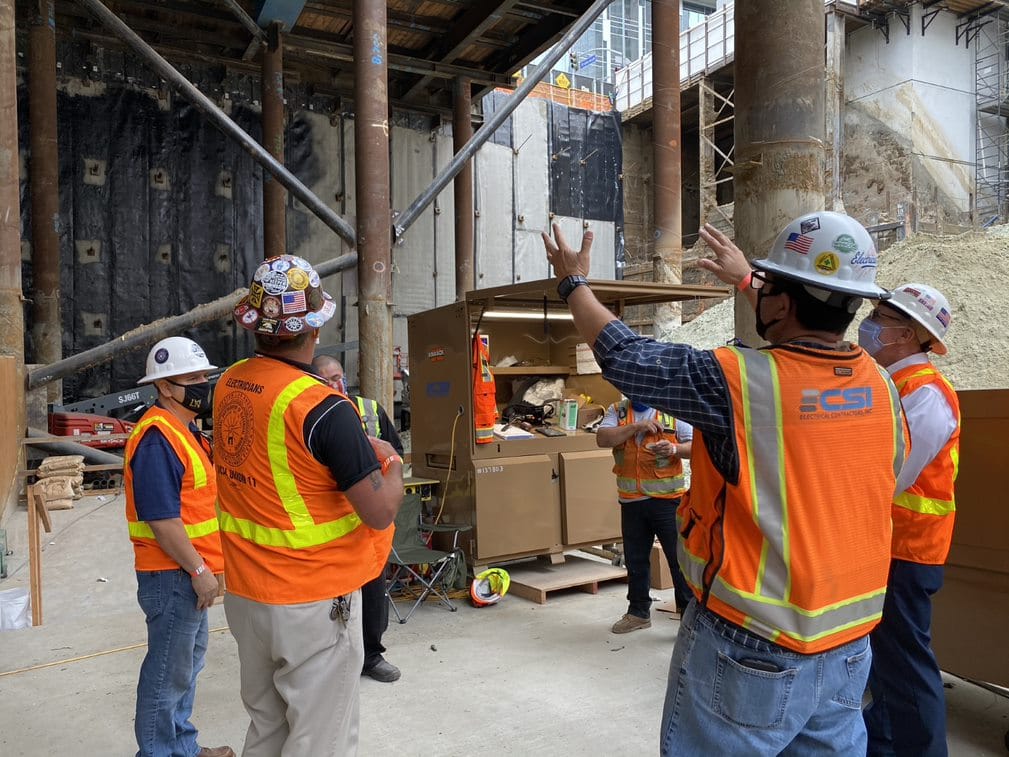 Vacant Lot to be Transformed

Work has kicked off for a crew of IBEW Local 11 Electricians at a downtown Los Angeles residential high-rise at 960 W. 7th Street. The site was a former elongated vacant lot located next to the Figat7th shopping mall and a parking lot, between 7th and 8th streets. Groundbreaking occurred in June of 2019 with completion estimated for 2022. The project is being developed by Brookfield Properties working with Webcor as the general contractor and is designed by Marmol Radziner and LARGE Architecture.

Local 11 currently has a crew of five members on the job, but it’s projected that there will be about 70 members working to build the tower within a year. They’re working for CSI Electric under the supervision of superintendent Alex Gonzalez whose family has been part of the union for three generations with two brothers, two children, four cousins and a daughter-in-law who are all members. “CSI is one of our premier NECA electrical contractors,” said Shomari Davis, business agent for IBEW 11’s District 1. “And Alex Gonzalez is a high-rise specialist.” This project marks the fifth high-rise that Gonzalez has worked on in the past eight years, including two nearby.

“Every project has its challenges,” Gonzalez said. “COVID-19 is a big challenge right now for us, as it is for everyone. The challenge is working in the heat outdoors wearing a mask, maintaining the distance, and keeping everything sanitized. Those are challenges because you still have to produce and finish on time.”

The plans call for the building of a 56-story tower that will total 64 stories including parking levels, defined by a slender glass and steel facade. Rising to 695 feet in height, the high-rise will offer 784 apartments including studios, one-,two- and three-bedroom units, 831 parking spots and 3,900 square feet of commercial space. There will be amenity decks on the podium and roof floors that will offer a pool and observation deck among other features. The main entrance to the development will be on Figat7th’s upper level and a newly built staircase between 7th and 8th streets will ease a steep grade change that exists across the site and also grant another access point to the shopping mall.

Currently workers are finishing up the tower mat foundation, which involves a very large multi-day concrete pour to achieve deep slabs. Once that’s complete, the Local 11 crew will move on to working on the parking decks. “For us it’s all about design and build,” said Gonzalez. “We’re the designers and the engineers as well.”

“This is a big job with a lot of hours for us that involves a lot of our members,” said Davis. “It’s right next door to Metropolis, which employed a ton of our members who were there for a couple of years. This one is going to be a great project for us and we’re a happy to have it.”