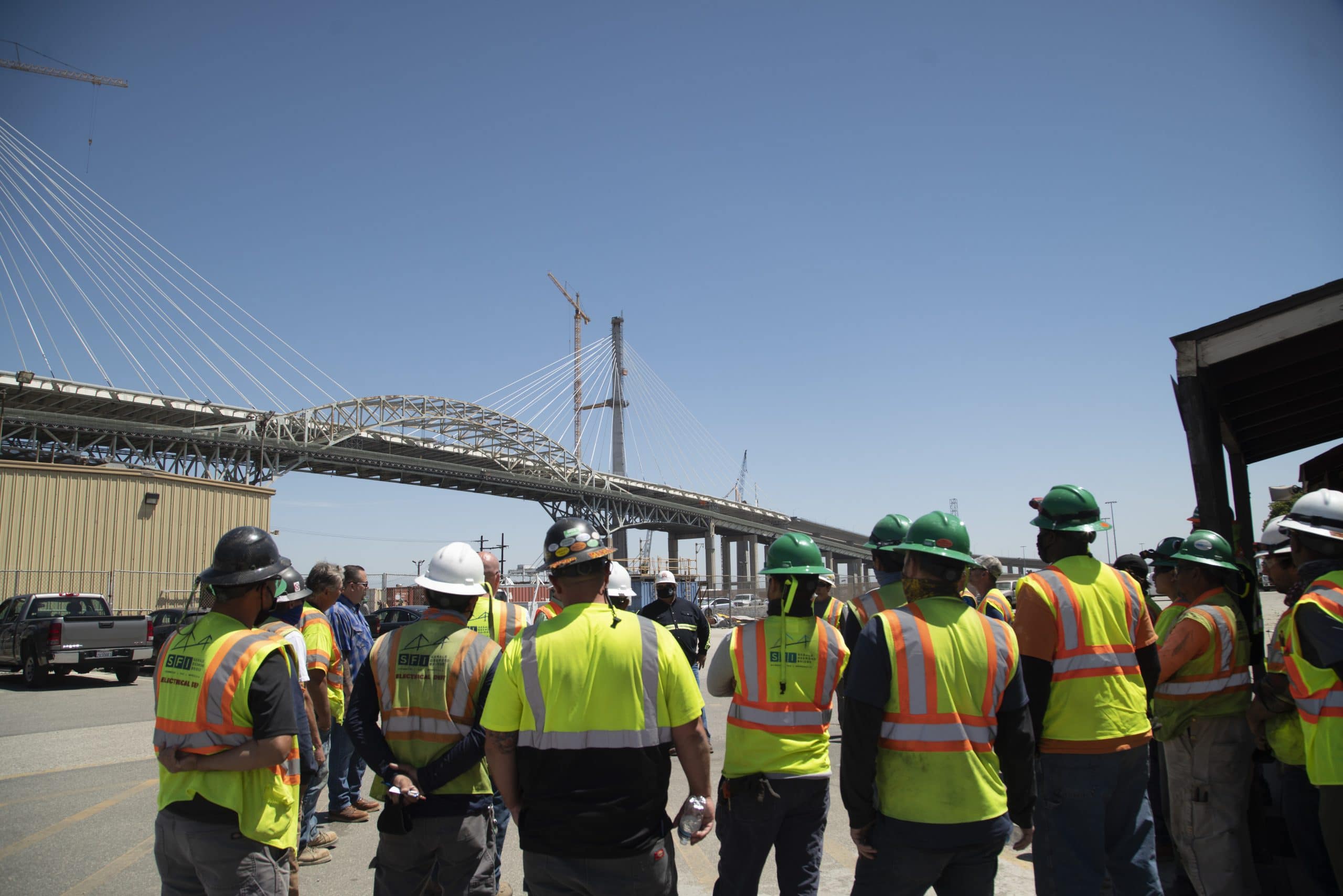 The atmosphere in Long Beach has changed in recent years. Tommy Faave, IBEW 11 Organizer, said that organized labor has made great strides in the historically non-union city, which is exemplified by a Citywide PLA covering public sector work. It’s also demonstrated by two major current projects that are being built by all-union hands. Both the Gerald Desmond Bridge Replacement project and the Shoreline Gateway project have provided steady work for Local 11 electricians as well as many other trades.

“I can tell you in the past the same developers that are now using union contractors used to use non-union subs,” said Faave. “It shows some history of where Long Beach was in the past and how it’s now headed toward union organizing. I think it’s about the relationships that have been cultivated with the Mayor, City Council and the community. Developers feel more comfortable spending their money by getting responsible contractors who can build projects on budget and on time.”

Developed by AndersonPacific and Ledcor Properties with general contractor Build Group, 315 residential units and 6,500 square feet of retail are being built at 777 East Ocean Boulevard on the beachfront with panoramic views of Downtown Long Beach. Chris Orozco, IBEW 11 Foreman on the project, employed by Rosendin Electric, said that electrical work is currently being done on the 19th floor as the crew works its way up the 35-story tower. Once complete it will be the tallest tower in Long Beach.

General Foreman Leo Medina said that one of the most challenging aspects of the job is that the subterranean garage is being built 30 feet below sea level. “I was born and raised in Long Beach so it’s great to be able to build in the city that I grew up in,” he said.

Apprentice Lucas Mendez who’s first job is Shoreline Gateway and had previously been an accountant before joining Local 11, said that working on the project is something he can take pride in and looks forward to showing his family the finished product.

“I’ve been here since it was down on the garage floor, so I’ve gotten to see the building from the ground up,” said Mendez. “I’ve gotten a lot of experience as opposed to another project where I’d be just installing lights or doorbells, I’m seeing the whole process in terms of what goes into the layout and all the different systems at play in the building and how it all comes together.”

A major infrastructure project, work on the Gerald Desmond Bridge has been ongoing for many years to enable the structure to continue serving as a critical access route between the Port of Long Beach, Downtown and surrounding communities. An estimated 3,000 construction workers have been involved in the undertaking including 30 to 40 IBEW 11 members at any given time over the past five years, with Shimmick Construction the main electrical contractor.

“It’s like a once in a lifetime opportunity for our members doing electrical work on the bridge,” said Faave. “You’re likely never going to get a shot at this again because every time you build a bridge it has a lifespan of 50 years. It’s a memorable thing that the electrical work will be there for generations to come.”

Local 11 members have already done work on the underground utilities, put in transformers, substations, underground conduits and lighting. They’re currently putting in fiber for messaging signs on the bridge and other communications infrastructure. About 10 members live in Long Beach, with one who only has to commute three minutes to get to the jobsite.

“The job is going really well,” said Charles Clark, Journeyman. “It’s a good job and one of the biggest for our Local right now. It keeps me busy and it’s convenient being close to home. We’re trying to wrap it up as expeditiously as possible. We could be done by early next year.”

According to Rick Van Hooser, General Foreman, one of the most unique features of the project is that it’s a design-build bridge requiring workers in the field to assist with the design process in order to engineer and build it. The work has also involved running conduits at great heights and in obscure places.

“I feel like it’s a great testament to the quality of work that IBEW Local 11 is capable of, and it goes to show that nothing is too complicated and no situation is too hard that we can’t get conduit in the air and light this bridge up,” said Hooser.