Message from the Business Manager

Message from the Business Manager 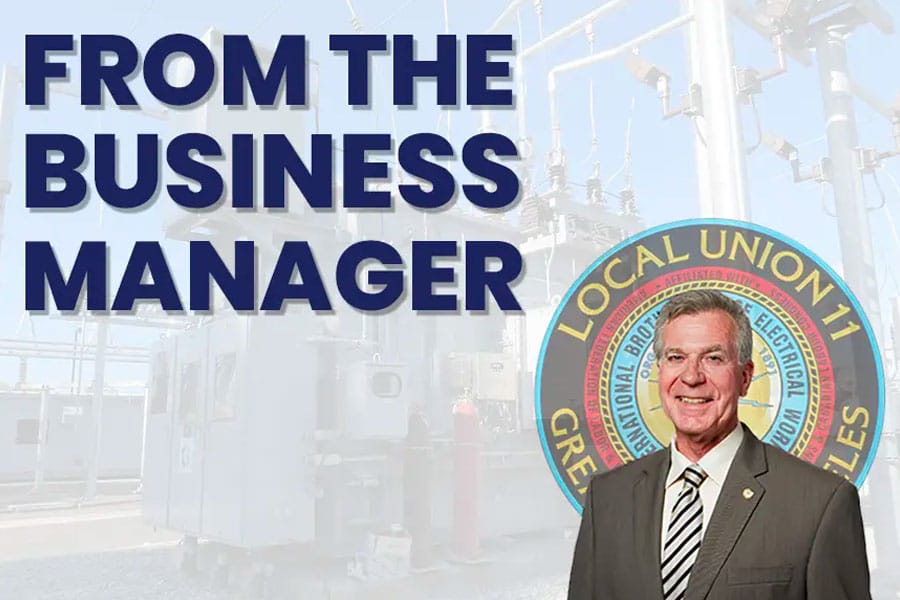 The year is flying by and it is already August. COVID-19 is still at the forefront with no end in sight. The annual Labor Day Parade which has been held in Wilmington for the past 40 years has been cancelled. The Local Wide Picnic which had been scheduled for October has been postponed due to California state restrictions on mass gatherings. We hope to have it in the spring pandemic permitting. All in person union meetings have been cancelled and with increased infection rates, I anticipate the same for August.

Work continues to be strong and our members are practicing social distancing, wearing face coverings, and increasing hygiene habits to remain safe while on the job. We have yet to see what the future holds. With decreased tax revenue, some states and cities are postponing infrastructure and retail business projects. New York’s Metropolitan Transportation Authority is putting a $51.5 billion capital program project on hold as the pandemic decimates subway ridership. Boston’s Logan Airport is cancelling $1 billion worth of projects due to decreased airplane travel. Much of our work in the Los Angeles area is on the Metro Rail and at LAX. Many of our construction projects are funded by payroll and sales tax revenue.  Area refineries employ many of our electricians, but upgrades and improvements have slowed with stay at home orders and gas usage declining. With less people able to work, spending habits change. Cities, counties, the state, and businesses suffer along with the general populace. Hopefully work remains strong and we can navigate through these rough times.

This year has seen a few changes on staff and your executive officers. Long time OPEIU clerical, Lou Ann Ryerson, retired after 45 years of service to the Local Union. Her knowledge and counsel were invaluable, and I know we would not have continued to function and fulfill our obligations without her. Good luck Lou Ann in retirement and we will always think of you. Another IBEW 11 member with 45 years of service has elected to retire. Jane Templin has been involved since her start as an apprentice, journeyman, foreman, general foreman, instructor, outreach coordinator and Vice-President of the Local Union. This list probably does not include many of her other contributions to our Local, where she has been so valuable and always a friend. Eric Brown has been appointed by the IBEW 11 Executive Board to fulfill her unexpired term. Chris Guerra has resigned from the Executive Board and has been replaced with Ben Frank who had originally been elected. Chris was also our property manager and did a great job. Thank you, Chris, for your service.

In closing, I would like to encourage everyone in these stressful times, to be patient, understanding and compassionate towards your fellow members, family, and associates. We all come from different walks of life, but all deserve to be treated with dignity and respect.