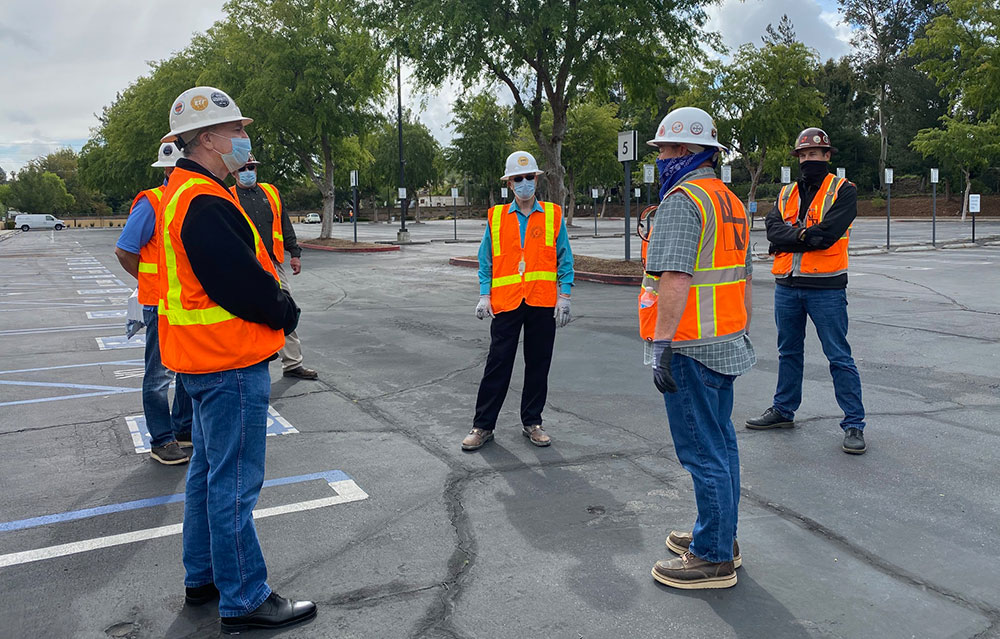 Safety Precautions the Focus on Jobsites

Every morning since the start of the coronavirus crisis, Marc Dwyer, a 27-year IBEW 11 member and superintendent at Touchstone Engineering who oversees several Local 11 projects at SoFi Stadium, asks the electricians who work under him, “Are you guys good to work here today?”

The response so far has been a unanimous yes, he said.

When Los Angeles Mayor Eric Garcetti issued his emergency “Safer at Home” order on March 19 directing residents to stay home to combat the spread of COVID-19, he made an exception for “essential activities.”

Among the activities considered essential: construction, including a number of high-profile projects where IBEW 11 members are working.

That means while most Angelenos were hunkering down at home, IBEW 11’s electricians were at Dodger Stadium, Kaiser Permanente’s medical centers, the Port of Long Beach, several high schools and, of course, SoFi Stadium, the future home of the Chargers and Rams, where, among other projects, they’re setting up the largest distributed antenna systems (DAS) head-end in the world.

At the same time, the union and contractors have been working hard to keep workers safe.

Joel Barton, IBEW 11’s business manager, has been visiting all the local job sites to field members’ questions about COVID-19.

“A lot of people are scared and that’s why it’s inherent upon me to go out and speak to them and try to calm their fears,” he said. In the past, having enough facilities have been an issue, but not now. “The owners and general contractors have stepped up and they are getting additional handwashing stations and [bathroom] facilities.”

In addition to that, contractors have implemented daily temperature checks and increased the frequency of cleanings, which includes disinfecting handrails, doorknobs, equipment handles, and common use areas. They’ve also given workers masks, such as gators and face shields, that go well beyond the regular personal protective equipment.

“Jobs are a little bit less productive but a lot safer,” said Ivan DeHerrera, IBEW 11’s director of safety, who fields calls at all hours from members worried about COVID-19. “That’s the learning curve … We’re going to have to learn how to be the best electricians in a situation like this.”

The union is starting a new safety program called “I Am My Brother’s & Sister’s Keeper” in which members are specifically asked to look out for each other in the current climate, especially apprentices who are still learning the trade.

Members are taking care to ensure physical distancing at the job sites. Floors have markings—at least six feet apart—noting where people can stand while they wait. There’s a limit to how many people are allowed in an elevator at a time.

At one site that DeHerrera visited, the 75 electricians gathered in a parking lot to hear him speak but were spread so far apart that he needed a speakerphone to reach the men in the back.

The physical distancing has naturally slowed down some of the projects. “We’re not at that point where we can have six guys standing together pulling wire with a rope,” DeHerrera said. “Everything’s going to be done differently just because of what we’re going through.”

Once-simple tasks like taking supplies off a truck can take longer since people can’t get near each other. Areas where previously three men would work now only allow for one.

Kelly Oliver, a 25-year IBEW 11 member and a superintendent at Baker Electric who oversees projects at the Port of Long Beach and at several high schools, acknowledged the slowdown. For example, he previously required that someone running conduit aim for 200 feet a day.

“Before this happened, I would get that number out of every guy,” he said. “Now because of this coronavirus, you’re getting half the production.”

Several Local 11 members have opted not to work, especially those who live with elderly parents, have young children, or have preexisting medical conditions.

Thanks to an emergency agreement that the national IBEW and the National Electrical Contractors Association signed in March, though, members can be furloughed during the COVID-19 emergency and are guaranteed to get their jobs back when they’re ready to return. In the meantime, they qualify for unemployment, and IBEW 11’s journeymen receive an additional $300 weekly supplement, a benefit only a few locals offer.

Meanwhile, the construction projects continue. “Everybody for the most part is being safe,” Oliver said. “I think everybody feels that we’re lucky that we’re working.”