At a Downtown Homeless Shelter, Local 11 is Making a Difference and Training the Next Generation

At a Downtown Homeless Shelter, Local 11 is Making a Difference and Training the Next Generation 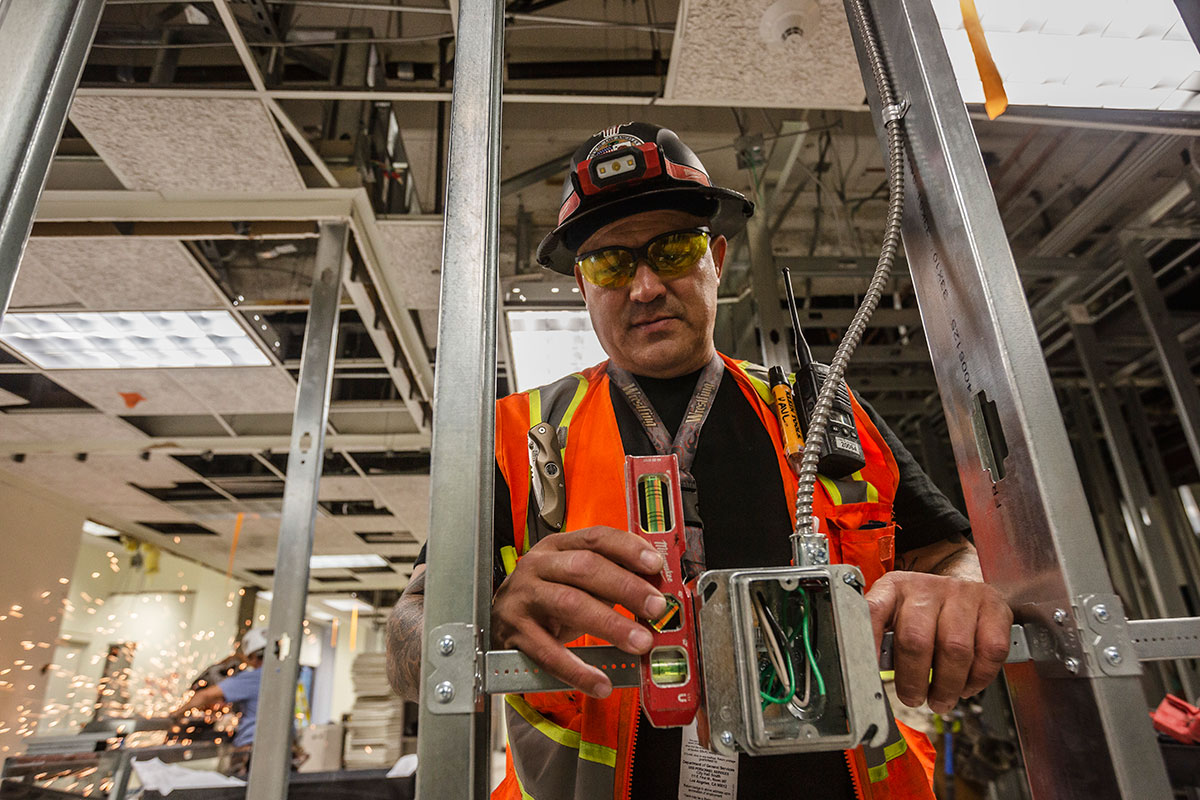 On a rainy morning in early March, Jerry Pavia and his team of electricians are at work converting the former Children’s Museum downtown into an emergency homeless shelter. The 17,000-square-foot facility, which was built in 1979 and closed in 2000, is part of the Los Angeles Mall complex that the city is slated to demolish ahead of its Civic Center renewal project. Until then, however, this building will house some 99 beds for the nearly 2,000 people living on the streets of Skid Row.

This emergency shelter is part of the A Bridge Home plan launched by Mayor Eric Garcetti following his April 2018 declaration of an emergency shelter crisis. The plan calls for temporary shelters across the city, while permanent housing is being constructed with funding from Measure HHH. “I know these Bridge homes are a big thing right now for the City of LA,” Mike Luna, an electrician with IBEW Local 11, says. “A lot of our electricians from Local 11 have been working at those homeless shelters.” While the majority of A Bridge Home shelters are tented structures, the former Children’s Museum is an existing building.

So does existing electrical infrastructure make the work here easier? “You would think so, but not really,” Luna clarifies. “We were thinking at first that maybe we could just reuse a lot of the stuff that’s already there, because they’re all connected together. But, you look at the blueprints for this job, and it has to be wired differently. So, pretty much we just had to use all new wiring.” 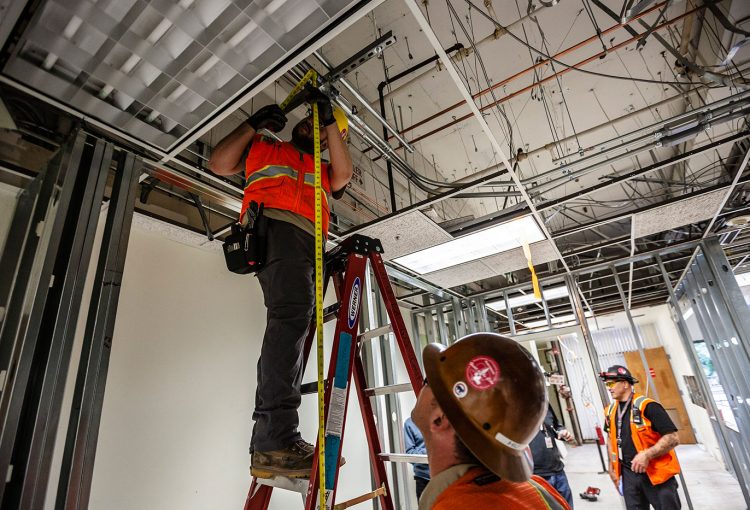 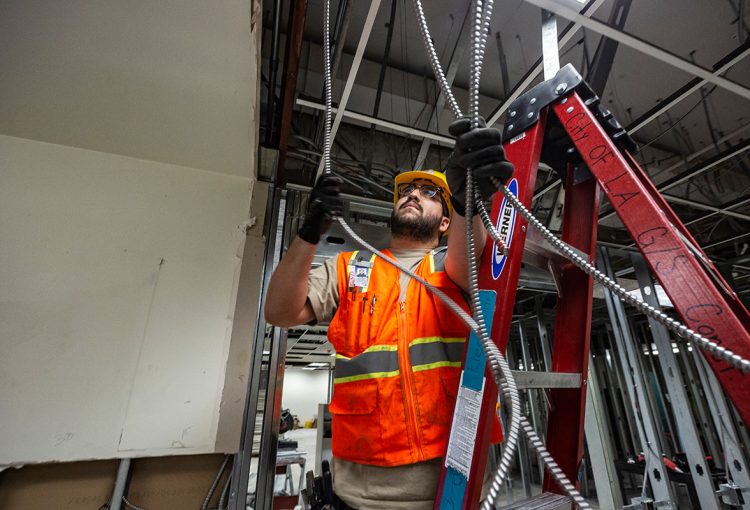 The team on this project is about nine members of Local 11. However, this site also includes two apprentices, which is a first for these shelter projects.

Edgar Valenzuela, one of the two apprentices, joined the crew at the former Children’s Museum site in mid-February.

“This job is showing me a little bit of everything, and it’s very in-depth,” Valenzuela says. “Coming from my old job, we were doing retrofit. Right here I’m actually working with pipe, working with MC, actually seeing how runs are happening with pulls. It’s very interesting.”

Valenzuela adds that every day on the site has taught him something new as he shadows the various journeymen. His biggest challenge has been learning to bend piping. “At my old job, I didn’t really do much of it,” Valenzuela says. “Now, I want to do more and more just to get it down to a perfect science. As an electrician, it’s very important to know how to bend pipe.”

Valenzuela wants other apprentices to know that “at first, things might seem weird and different, but if you try to learn, you’ll learn everything that you need to know.” 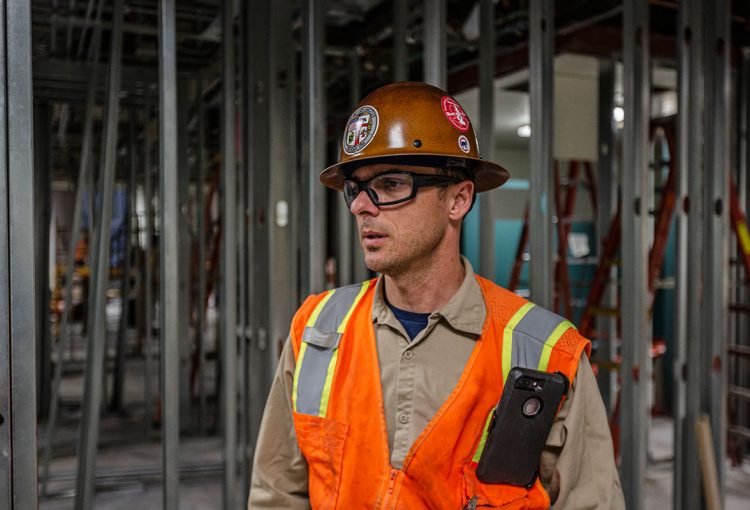 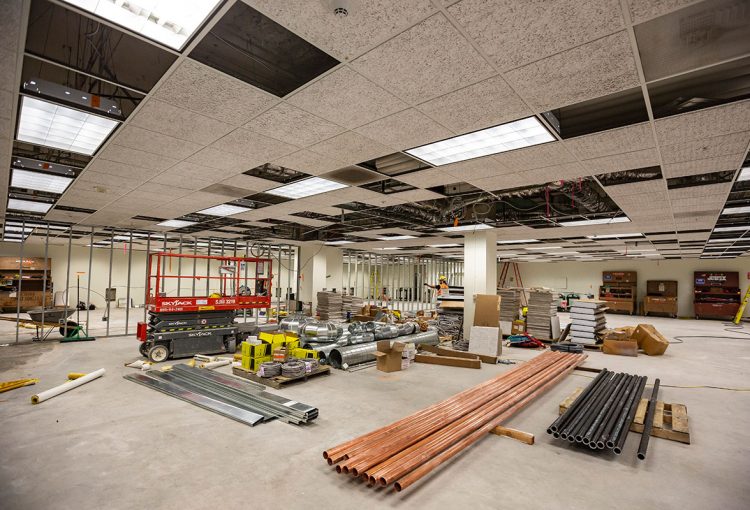 “What happens is, we have our tasks to do, and you kind of get him warmed up to all the materials, first, and handling the tools,” Chad Hudson, a Local 11 journeyman electrician, explains of how he teaches the apprentices. “Then you kind of tell him to help you, so he sees what’s going on. He’s involved in the whole thing instead of just me having him hand me tools, which also happens, but eventually we got to get him into it. The more time we put into him now, the more time we’re going to save later because he’s going to know it.”

Ultimately, projects like this shelter are special to the crew. “Getting the homelessness problem solved in the city is really important right now because it keeps getting worse,” Hudson concludes. “We have the opportunity to get paid and do it, but at the same time, it’s a little better than just making money for someone. It’s definitely a positive thing.”