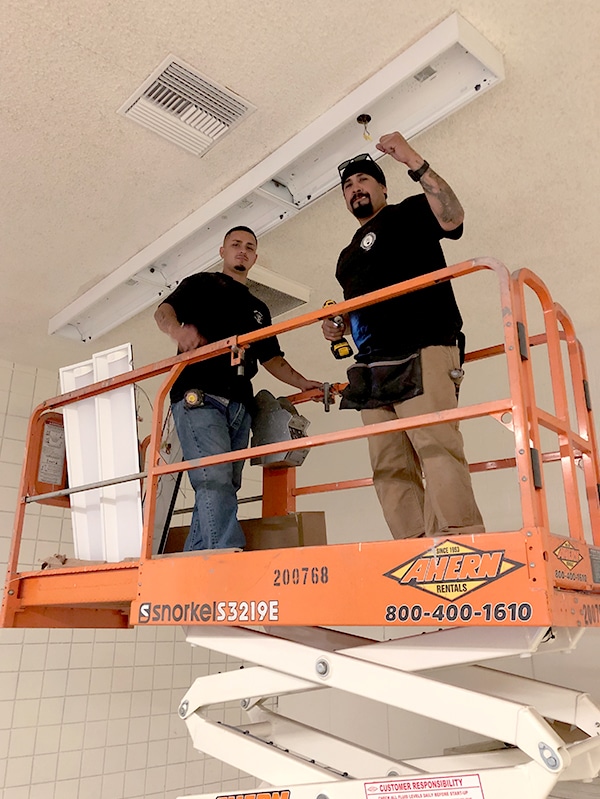 On July 12, a group of 15 IBEW Local 11 members volunteered their time and labor to rehabilitate the lighting system for the Veterans of Foreign Wars Post in Azusa, which has been a gathering place for veterans for more than 70 years. The volunteers belong to the Brothers Helping Brothers group within Local 11.

“I founded Brothers Helping Brothers five years ago as a way to assist members who are experiencing sickness or distress from accidents or other situations,” said Ivan DeHerrera, Jr., a Local 11 Assistant Business Manager. “This is a group where everyone fits in. We have brothers and sisters of all ages who participate. This was our first community volunteer activity and we’re trying to expand. We want the purpose of the group to broaden; we want the impact of our assistance to reach more people.”

In the past Brothers Helping Brothers has generally held events such as barbecues to help raise money for members who are struggling with personal difficulties. However, whenever Local 11 would meet regularly for union meetings at the VFW, it was noticed that the aged lighting system was starting to fail, sometimes even leaving veterans in the dark, especially in the kitchen. DeHerrera immediately identified it as an opportunity to expand the reach of Brothers Helping Brothers and reached out to get members on board.

With the help of Morrow Meadows, who donated the light fixtures; and Conti Electric, who supplied the scissor lifts for the project, the members met at the VFW following a full day’s work and donated their time and skills until 11 p.m. to get all 35 light fixtures back on for veterans and the community.

With the lights shining brightly the veterans are now able to fully enjoy their facility for social and community-building events. Spaces at the VFW are also rented out to the greater community, so the efforts will have far-reaching benefits. DeHerrera plans to use the momentum to spur Brothers Helping Brothers to tackle projects at other VFWs. At a recent union meeting 35 members signed up for future volunteer projects. “At this point we have enough contractors and volunteers on board to do all the VFW’s in LA County,” he said. The next volunteer project will likely be for the VFW in Pomona, which in itself will be a good organizing opportunity as the Union doesn’t currently have any PLAs in that city.

The efforts are especially meaningful for Local 11 members, because many of them are veterans themselves, so not only is it brothers helping brothers, but it’s also veterans helping veterans. Additionally, the volunteer activities are chances to organize as they provide veterans who are returning home from recent service to the country with an opportunity to learn about the promising career paths through becoming a member of IBEW 11.

“Our members want to be involved,” DeHerrera commented. “Anytime we do community service it’s good for the Union.”