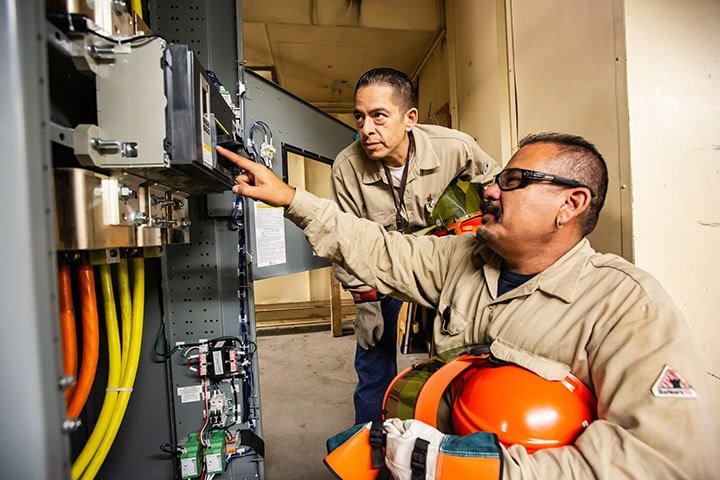 When Jerry Pavia first suggested to Robert Rucker at an IBEW Local 11 meeting that he join him on a project at City Hall, he was hesitant.

Rucker, 48, was ready to leave the company he was currently at. But he didn’t know if a city job was the next step.

Pavia assured him that wasn’t what he had in mind, and he was right.

Several months into a project to upgrade the City of Los Angeles’ servers, Rucker is finding that there’s no typical day at City Hall. Some days he’s running conduit and pulling wire. Other days he’s installing new equipment. On a day in early March the team was drilling rods into the ground for cages to better protect the new servers from earthquakes.

“I enjoy getting my hands dirty and doing something where you actually have to think,” Rucker said. “It gives me a challenge.”

Mike Luna, 42, an inside wireman, notes that the work is similar to what he used to do when he worked for contractors.

“A lot of the jobs are actually installing new stuff — remodels and bending pipe, pulling wire,” he said. “I’m pretty sure a lot of guys outside think, oh they don’t do that kind of stuff here at the city, but we do.”

Pavia, the project’s foreman, has been working for the city for about two years. He’s leading both the server upgrade and a new project to change City Hall’s lighting system to LED lights.

Whenever he hears about a new city project that requires electricians, he offers to take it on and then put the word out to Local 11, for which Pavia serves on the Executive Board.

He says that working for the city allows electricians to utilize skills they may not be able to use elsewhere. While walking in the garages, Pavia points to what seems like miles of curved conduit and notes that his team bent it themselves using a Greenlee 555 bender.

The other part of the job he enjoys is the troubleshooting. Obstacles pop up daily, meaning the team has to come up with solutions, often in collaboration with engineers, other departments, and their counterparts from the other trades.

“I think the biggest accomplishment is that you take on this big idea that really nobody knows what’s foreseen, so [we] do the discovery and research and try to put this whole plan together,” he said.

“Being able to say … we put this whole project together from scratch,” he said. “It’s fulfilling at the end of the day.”

The team also gets a key weekly scheduling perk: They work four 10-hour days, and then take every Friday off. “That extra day can get you things done that you can’t do on a normal workday,” Pavia said.

Anthony Pastran, 47, came onto the project more than six months ago after 16 years as a transportation journeyman working on street lighting and traffic signals.

When he started, Pastran’s main goal was to gain experience as an inside wireman and then pass the test to work at the Department of Water and Power. While he’s still awaiting his results, he said he’s having second thoughts about whether he still wants to go to DWP.

“Coming to work for the City of LA is amazing. There’s always some new experience,” he said.

He especially likes seeing the result of all his work. “From point A to point B, right when you first started, it looks nothing like this,” he said. “You get to see your work here. Over there, I see my same traffic poles. Over here I take pictures as much as I can to show my family what I’m doing.”